The Life of Kylie

I’m so excited about the Tree Change Dolls!

A mom has been removing the face paint on Bratz and turning them into realistic looking dolls in hand-knit clothes. This combines so many of my concerns as a parent: reduced consumer waste and a positive body image for my kids. Hooray!

It sounds like Tree Change Dolls are being overwhelmed with requests and orders. I’m not surprised. I would love to try “making under” some similar dolls.

Just a few weeks post-Christmas (and birthdays), my nine-year old daughter begged me to buy her “dolls like her friends have.”

I grew up with a ban on Barbies. I got around it by playing with them at my friends’ houses, and yes, that play always involved things that would’ve made my parents blush.

However, on a deeper level, I took to heart what my parents had told me about Barbie’s breasts being too big. I think they were trying to protect me from the crazy body image example that Barbie communicates, and I’m grateful for that. They did finally let me earn my own money for a real Western Barbie when I was ten, and that was such a joyful purchase! She had a button in her back that made her blue-lidded eyes blink, and curly hair that tended toward frizzy just like mine, only more platinum.

Considering that I am way more feminist than my, okay, firmly rightwing parents, you might guess–wrongly–that I practice a complete ban on Barbies, Bratz, and Disney Princesses, but quite a few have made it into our household. I may have even purchased some of them myself. 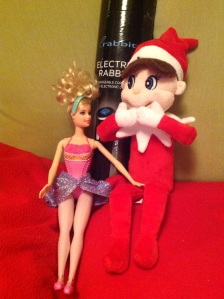 But I share all the usual misgivings about the messages these send about big boobs, big eyes, tiny waists, acceptable colors to wear, and career aspirations, and periodically discuss these messages with my daughter. I’ve made her watch quite a few videos on UpWorthy.

This time around, I objected to the expense–I had just spent tons of money on the holidays and the kids’ November birthdays.

And I objected to the waste! I’ve been trying to reduce the amount of non-recyclable packaging we bring into the house and have been making purchase decisions to avoid clam shell and blister packs (tip: Trident gum is all recyclable packing with no plastic packaging). I’ve made the kids watch videos about the Plastic Trash Island in the middle of the Pacific. I wrapped all our Christmas gifts in fabric that I purchased a few years ago and ribbons that we use over and over again.

So with these three principles in mind–feminism, budget-consciousness, and environmental stewardship–I campaigned for my daughter to take a look at the secondhand dolls at Goodwill.

She protested and counter-lobbied: The dolls would have tangled hair! Missing shoes! Marker on them! All of her friends have new toys!

The reasonable sort that I am, I offered her a deal: we’d look at the secondhand dolls first, and if they were all yucky, then we’d get a new one. I was confident we’d be able to find an acceptable doll.

And we did! We found three that were completely free of blemishes (and shoes), with untangled hair, clothes, and a super-huge special bonus! Two of them were dark-skinned. I was thrilled that we’d found what appeared to be an Indian Princess and a Brazilian Carnivale Dancer–a simple wardrobe change would make them more progressive.

It was at this point that my daughter informed me it wasn’t Barbies that she was after.

It was something else. Something je ne sais quois. Hard to describe. Hmm. Maybe she could identify them in the toy aisle at a regular store?

Exasperated, I took her elsewhere. Yes. We braved the dreaded “pink aisle” at the local one-stop-shopping super center. I pointed out that the amount of plastic packaging from the toys in just this one aisle could probably be stacked to the ceiling and that was just ONE aisle in ONE store. We talked about how all the Barbies wore hot pink and how the words on the packages were all about fashion. She admired the Equestria girls–bizarre humanoid My Little Ponies with enormous heads and gangly limbs:

But after much deliberation, she decided none of them were right.

Were my messages getting through to her? You cannot possibly understand how rare of an event this is. My daughter is persistent, and is destined for a career in Interrogation. Then as we were about to leave, we noticed some Hasbro My Little Pony toys that were packaged in plastic bags (recyclable!) stapled to cardboard (also recyclable!). This made us both happy.

8 thoughts on “Be the Change: Tree Change Dolls”

Say Anything. Anything at all. Cancel reply